It's Not About the Technology Stupid!

I'm busy reading Kentaro Toyama's new book Geek Heresy. Readers of this blog (thanks Mum!) will know that I regularly draw upon Kentaro's amplification thesis, which argues that, in itself, technology is not the solution to anything, and that all technology can do is amplify existing human capacity and intent. This analysis leads Kentaro to call for an increased emphasis on identifying and developing human capacity and intent as the primary focus of ICT4D - rather than the current over-emphasis on the development of technology itself.

So I was interested to also read Ken Bank's blog in which he suggests that best ICT4D practice should be limited to developing technology and making it freely available - as he did with FrontlineSMS. In his blog Ken argues that even the act of designing alongside end-users is problematic - as it undermines 'local' capacity. He seems to take a fundamentalist position in arguing that best ICT4D practice is restricted to 'local people helping local people' and distant people providing technology. Not-local people, it seems, must just drop the tech and get out of the way.

Kentaro and Ken can't both be right. So what is best practice in ICT4D?

Let's agree that independence and self-reliance are key objectives of ICT4D i.e. the ability for people to solve their own problems. The question then becomes: is this objective best served by using ICT4D practices that focus on technology access alone; or by practices that also include building the skills and capacities necessary to make 'effective use' of that technology? Whenever a new technology is created the skills and capabilities necessary to make optimal use of it are often - in the first instance - available in one location. Enabling effective use is often best facilitated by people meeting and learning from each other.

The idea of enabling technology to further development in ways that are 'minimally invasive' is not new. It is the basis of Sugata Mitra's famous 'Hole in the Wall' experiments in ICT4E and, of course, Nicholas Negroponte has advocated dropping laptops from helicopters. Yet, as Kentaro Toyama argues in Geek Heresy, providing technology without also developing the skills and capacity of disadvantaged people will usually have the effect of widening the gap between rich and poor.

In unequal societies, provision of technology alone has repeatedly been shown to further advantage the already privileged. This is because they already have the necessary skills, resources and social capital to exploit the technology. For this reason - if the objective of ICT4D provision is human development based on social justice - it is necessary for all ICT4D initiatives to begin with the provision of training and capacity building to currently disadvantaged groups.

We all share the objective that people facing disadvantage should themselves be the authors, architects and arbiters of development. However technology is only 10% of the overall solution; building human capacity and intent is 90% of best practice in ICT4D. If ICT4D initiatives are to lead to equitable outcomes then they must necessarily design for equity from the outset and that must involve focusing on the capacity and intent of the most disadvantaged (see diagram). 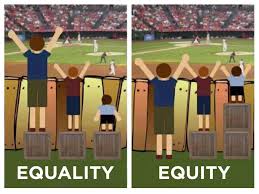 Note: in the original version of this post I wrote that I bet Ken had travelled to provide support to FrontLine SMS users. I was wrong. He assures me that he never did. So I have deleted that reference.