Should all ICT4D be Commodified?

Alex Deng from Huawei's Corporate Sustainable Development Committee has posted a stimulating article on the Harvard Business Review site. In it he argues that to really help the global poor we must create technology that they’ll pay for.

It may not be a new argument but Alex Deng makes it well, and I do not entirely disagree. After all the ICT4D organisation that I founded and ran for fourteen years charged fees for the technology and training that it provided. However that is not the whole story.

When we first launched Computer Aid International in 1997 we used grant funding to give away hundreds of computers for free. At these volumes we could certainly have carried on providing computers for free in a way that was sustainably financed by donors and volunteer labour. However we had ambitions of providing many thousands of computers per year - and that could not be resourced through grant funding alone. Instead we increased the value of our products (higher specifications and reliability) and phased in fees to recipients. By the time I left in 2010 over 80% of our income came from this source and we were able to ship tens of thousands of computers per year. Computer Aid has now provided almost a quarter of a million computers and was able to expand its range of ICT4D products and services. This expansion could not have been resourced with donor funding alone.

However I do not conclude from this that all ICT4D should be commodified. ICT4D should focus on delivering value as determined by end-users but does not need to be fundamentalist about revenue streams. Charging user fees is one good way to test the cash value that users assign to your products and services but it is not without its own problems. Provision of ICT4D on a fee-paying basis inevitably confers advantage on those with existing cash. Where the objectives of ICT4D initiatives include reaching people under-served by existing market mechanisms then mechanisms other than the market need to be found. As Audrey Lourde has taught us: 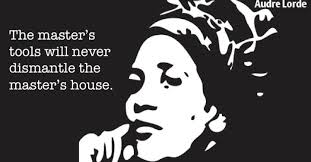 There are many examples of sustainable initiatives delivering value and not charging fees to those on low incomes. Google doesn't levy user charges for its search engine. Mpesa was launched with DFID funding. In the UK we enjoy ICT education in schools and eHealth care through the National Health service which is free at the point of delivery. All of these initiatives deliver value and are sustainable. So I conclude that whilst delivering value is essential there is room for flexibility around revenue models for ICT4D. I imagine that different resourcing mechanisms will suit different circumstances at different times and in different cultures.

Maybe blending income streams to include fees and grants and donations can serve as means to allow ICT4D initiatives the flexibility to reach cash-poor users that a pure market mechanism would never serve?

What do you think?