Mobile internet use in the Philippines is growing rapidly, but so are associated digital inequalities. I've just published a new research report with my colleague Kevin Hernandez based on our study in the Philippines, which suggests that far from creating equality of access to information, the use of mobile and internet technologies is creating new class divisions in technology access and new forms of digital inequality. In the report we emphasise the need to add ‘analogue complements’ to our digital development initiatives in order to ensure that they don’t unintentionally exacerbate existing social inequalities.

The Philippines is famous as the text message and social media capital of Asia and has the highest growth rate in smartphone ownership in the region. There are more mobile phone registrations than people in the country. So on the surface it seemed like the perfect place to launch new digital governance initiatives and to research digital governance technologies.

What we in our research found poured cold water on this techno-optimism.

Once we dug under the surface we found that inequality of use was structured along familiar lines of gender, ethnicity and class. In a previous blog I shared what we learnt about the main barriers to technology access in the Philippines. In that blog I focused on how we used the 5 'A's of Technology Access to understand some of the main constraints on technology access being experienced by Filipinos. In this blog I want to share what we learnt about newly-forming classes of mobile ownership and connectivities.

The research focused on participatory governance technologies was part of the Making All Voices Count process. We were looking specifically at the extent to which citizens were able to access e-Government information and services, as well as be active players in online ‘participatory governance’ initiatives using internet-connected mobile phones or computers.

We ran five focus groups and conducted multiple interviews in three locations: in the capital city Manila, in Puerta Princess on the island province of Palawan, and in a remote village of Batak indigenous people. In total we spoke to 76 people ranging from donors and government officials to civil society representatives and to citizens engaged in governance activities in the areas of participatory budgeting, and the public governance of schools and extractive industries.

The upper class of technology access that we saw in the Philippines were those individuals who enjoy Wi-Fi access at home and in their offices and are fortunate enough to own the latest smartphones with post-paid monthly mobile contracts that come with several gigabytes of mobile data per month.

The middle class of mobile and internet access are those that own a lower range smartphone and a post-paid contract with relatively small mobile data allowance, and less Wi-Fi access. They have the ability to make almost unlimited voice and text communications but need to be frugal with their mobile data and use it primarily for WhatsApp and other instant messaging apps rather than for surfing the web.

The working class of digital technology access were those Filipinos who have basic mobile phones on pre-paid contracts and who mainly use the relatively inexpensive text messaging. Without access to Wi-Fi at home or work their data access is primarily confined to Facebook Basics.

The under class of technology access in the Philippines is typified by the indigenous people that we visited - the majority of whom own no mobile phone. Those who did own basic phones struggled to keep them charged with power and pre-paid call credit. In order to find a cell phone signal they had to hike over eleven bridges to the nearest highway and they relied mainly on received incoming texts rather than making outgoing calls. 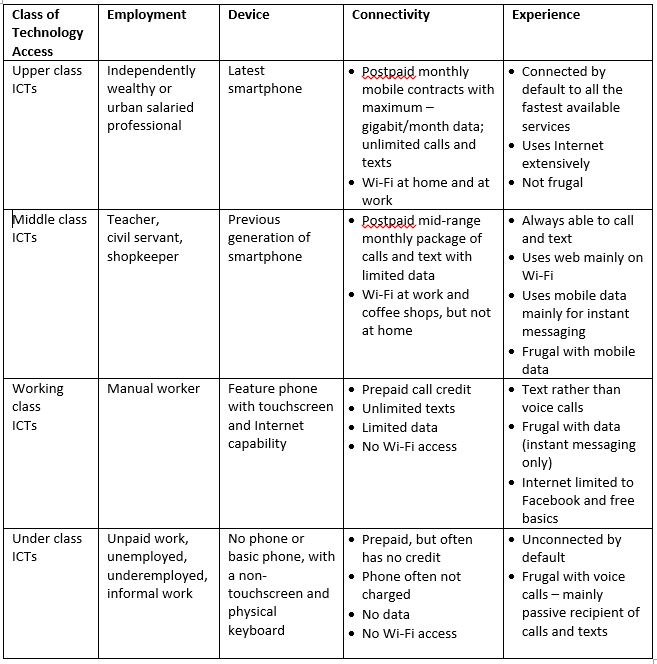 These categories are schematic; further research is necessary to test them with larger samples and in other locations. However they do build on Professor Jack Qui’s work on Working Class Technologies in China and on Indra De Lanerolle’s findings from South Africa about fragile connectivities and frugal communication practices in Mobile Diaries of the Less Connected. These categories of technology access illustrate that increased mobile penetration is not delivering a new level playing field but that conversely it is fuelling the formation of new class divisions and new digital inequalities. These classes of technology reflect existing socio-economic classes and levels of income and potentially exacerbate them.

The dominant narrative is that increases in mobile phone ownership and internet use signify development progress. The Sustainable Development Goals use mobile phone registrations and internet use as proxy indicators for sustainable evelopment. It was the statistics about increased levels of smartphone ownership and social media use in the Philippines that led us to base our research there. However once we were on the groun we learned quickly that these binary indicators disguise more than they reveal. Our study provides evidence that increases in mobile ownership can occur alongside widening technological and socio-economic inequalities. The people who were most able to make their voices heard on participatory governance platforms in the Philippines were ‘the usual suspects’: largely urban, middle-class and university-educated.

What we learned in the Philippines was that development cannot really be understood in the binary terms of statistics on how many people are (not) connected. It is possible to 'connect the unconnected' at the same time as increasing inequality. In the Philippines new classes of device ownership and connectivity are forming that partly reflect and sometimes amplify patterns of existing privilege and disadvantage.

Technology is changing rapidly, and uptake is expanding, but digital divides and economic inequalities are growing at the same time. The most disadvantaged remain unconnected whilst the already privileged race further and further ahead. It is those with the most disposable income, digital literacy and social capital that are first to own and make effective use of each new generation of technology. Those with least technology access experience new disadvantages.

This does not mean that disadvantaged people are not active in appropriating technology to their advantage wherever possible – they are. Nor does this mean that development initiatives should not use digital technologies – they should. What it does mean is that digital development initiatives wishing to avoid unconsciously excluding those with lower-class device ownership or connectivity must conduct effective market research and on the basis of the research then 'design for equity'.

Achieving this requires that those active in digital development conduct careful analysis about existing device ownership, levels of digital literacy and classes of connectivity - prior to and during our digital development initiatives - in order to avoid unintended exclusions. Such analysis will enable digital projects to be improved by the addition of appropriate ‘analogue complements’ such as training and capacity-building to ensure that we ‘leave no one behind’.

A version of this blog first appeared on the Making All Voices Count website here.