Like so many aspects of our life, democratic debate is increasingly moving online. Yet it seems like every time citizens adopt a new digital tool or enter a new digital space to voice opposition, repressive governments respond with a whole arsenal of tactics to dampen dissent and deny their right to opinion and expression. For every new activist tactic there are three or four state countermeasures. New research has found that this digital game of whack-a-mole is playing out across Africa. An issue about which the activists, analysts and academics of the African Digital Rights Network are conducting research and raising awareness.

For all of us, the right to be heard and to influence decision-making on issues that affect our lives is a cornerstone of open democracy and a sustainable development goal. In an increasingly digital world being heard means making use of mobile phones and social media – especially during a pandemic when social distancing makes public protest both difficult and dangerous. Marginalised groups have repeatedly made creative use of digital technologies to create spaces online to give voice to neglected issues, influence debate, and hold to account those with power. #MeToo and #BlackLivesMatter are powerful examples of this in action.

The ability to use online space to voice dissent is especially important in repressive contexts where public demonstrations or open criticism of government are met with violence or arrest. Such repression is growing around the world. Studies show that we have now experienced 15 consecutive years of global decline in political freedoms and only two of Africa’s 54 countries (Caep Verde and São Tomé and Príncipe) are now categorised as open democracies.

Ten years ago, digital tools and social networking platforms, such as Facebook and Twitter, played a supporting role in the North African revolutions that removed Presidents Mubarak and Ben Ali from office in Egypt and Tunisia. Social media has since become a part activists’ repertoire across the continent. The citizen-led campaigns #RhodesMustFall in South Africa, #ENDSARS in Nigeria, and #FreeBobiWine in Uganda successfully challenged incumbent power and helped put neglected issues on the national and international agendas. To counter the influence of online campaigns and reduce their potency, repressive governments have invested heavily in digital surveillance, disinformation and internet disruption technologies to deter dissent and dampen online democracy.

The African Digital Rights Network was established in May 2020 with a grant from UKRI. The network brings together African activists, analysts and academics with UK researchers to produce evidence, raise awareness, and help build the necessary capacity to enable citizens to safely and freely exercise their online digital rights. It brings together twenty-five digital rights activists, researchers, journalists and policymakers. They have produced the first ever study of the openings and closing of online civic space, comparing the situation across ten African countries.

The network researchers understand ‘Digital rights’ to be existing human rights in online spaces and agree with UN Special Rapporteurs in wanting to see all existing human rights promoted and protected online; including the rights to privacy, and freedom of opinion and expression. In the study African activists and researchers identified 65 examples of activist use of digital tools to open democratic space online, which included the use of SMS, blogging, social media and privacy and anonymity tools. The research that the network has published has found twice as many examples of government use of tech tools and tactics to close down online space for safe and open deliberation.

The main pattern to emerge from reading across all ten digital rights country reports is that each new generation of digital technology used by activists to enable free expression, is met by a barrage of government measures designed to shut down those freedoms and deny citizens their digital rights. This happened with SMS activism, blogging activism, social media activism and even with privacy and anonymisation tools.

Tech savvy activists often steal a march on the state in their creative use of new mobile and internet technologies to call out injustice and demand social change but whenever these online civic space are created we often see the state mobilising its greater power and resources in reply to shut them down. Newton’s third law states that for every action there is an equal and opposite reaction but in the case of digital activism it seems that there is always an unequal and opposite reaction. It’s like a lopsided game of whack-a-mole. 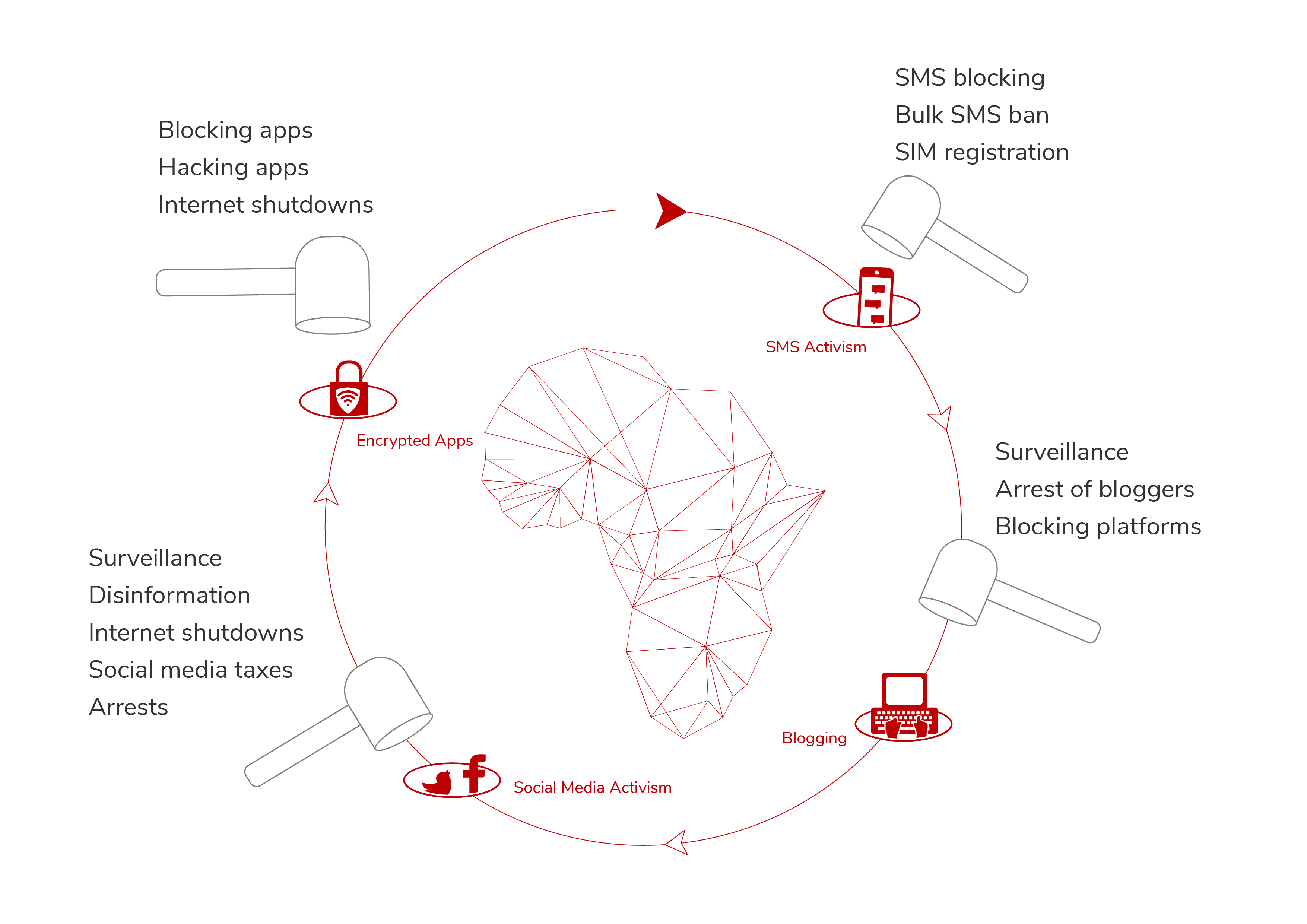 The digital games of whack-a-mole found by the African Digital Rights Network include:

SMS Activism: activists made creative use of SMS text messaging to express their opinion and mobilise for change. There are hundreds of examples across Africa of SMS being used to voice dissent, advocate for marginalised groups, organise campaigns, and mobilise populations. However, early success in SMS activism was met with a range of repressive measures including mandatory SIM registration, message surveillance, bulk SMS bans, and arrests for political speech in SMS messaging.

Blogging Activism: the ability to create a blog and publish on issues ignored by mainstream media and political actors made blogging a key tool for activists in many African countries. What the research reveals is that repressive government used a variety of techniques to reduce their potency including web surveillance, blocking websites and arresting bloggers for political speech. The co-author of the Ethiopia country report Atnafu Brhane was a member of the Zone9 Bloggers and spent 540 days in jail for blogging before establishing the human rights organisation CARD.

Social Media Activism: social media platforms including Facebook and Twitter have proved to be the most powerful digital technologies for social activism enabling the building of very large social networks and the ability to instantly message thousands of contacts repeatedly at no incremental cost has greatly aided social mobilisation. It has also provoked the most concerted response by the state and corporation using the widest array of tech tools, tactics and techniques including internet shutdowns, systematic mass surveillance, and covert micro-targeting to manipulate beliefs and behaviour – often using coordinated ‘troll armies’ and automated ‘bot-nets’, and of course … more arrests for online political speech.

Privacy Tools: one means to evade surveillance and the invasion of privacy is the use of anonymisation and privacy-protecting tools such as virtual private network (VPNs), encrypted messaging apps like Signal, privacy protecting browsers like Tor and tracking-free search engines like DuckDuckGo. Ugandan’s have made widespread use of (VPNs) to digitally disguise their location. Millions are now migrating to more secure messaging apps. This has generated the ire of repressive governments who are now engaged in efforts to hack, block or make illegal these tools to protect the universal right to privacy.

So, what can be done about this seemingly endless whack-a-mole contest?

The first round of research outputs published concludes that making citizens aware that their rights to privacy and freedom of speech exist and so should be protected both online and offline. This is key, as is the need for legislation that protects the public from government violation of these rights and the wider role of digital technology in governance and democracy, for which there is much excellent research on from the Making All Voices Count project.

To date there has been very little systematic research to detail who is using which tools, tactics and techniques to diminish citizens’ digital rights in Africa, and without clear definition of the problem it is impossible to craft effective solutions. In its first year, the African Digital Rights Network has begun this process, in collaboration with its member networks the Association of Progressive Communications (APC), Collaboration on International ICT Policy for East and Southern Africa (CIPESA) and Paradigm Initiative (PIN). In the next phase we are now focusing in on the issues of surveillance, disinformation and internet shutdowns which were identified as priorities in the country reports and are expanding the network to include additional countries and expertise.

A version of this blog first appeared on Open Democracy. 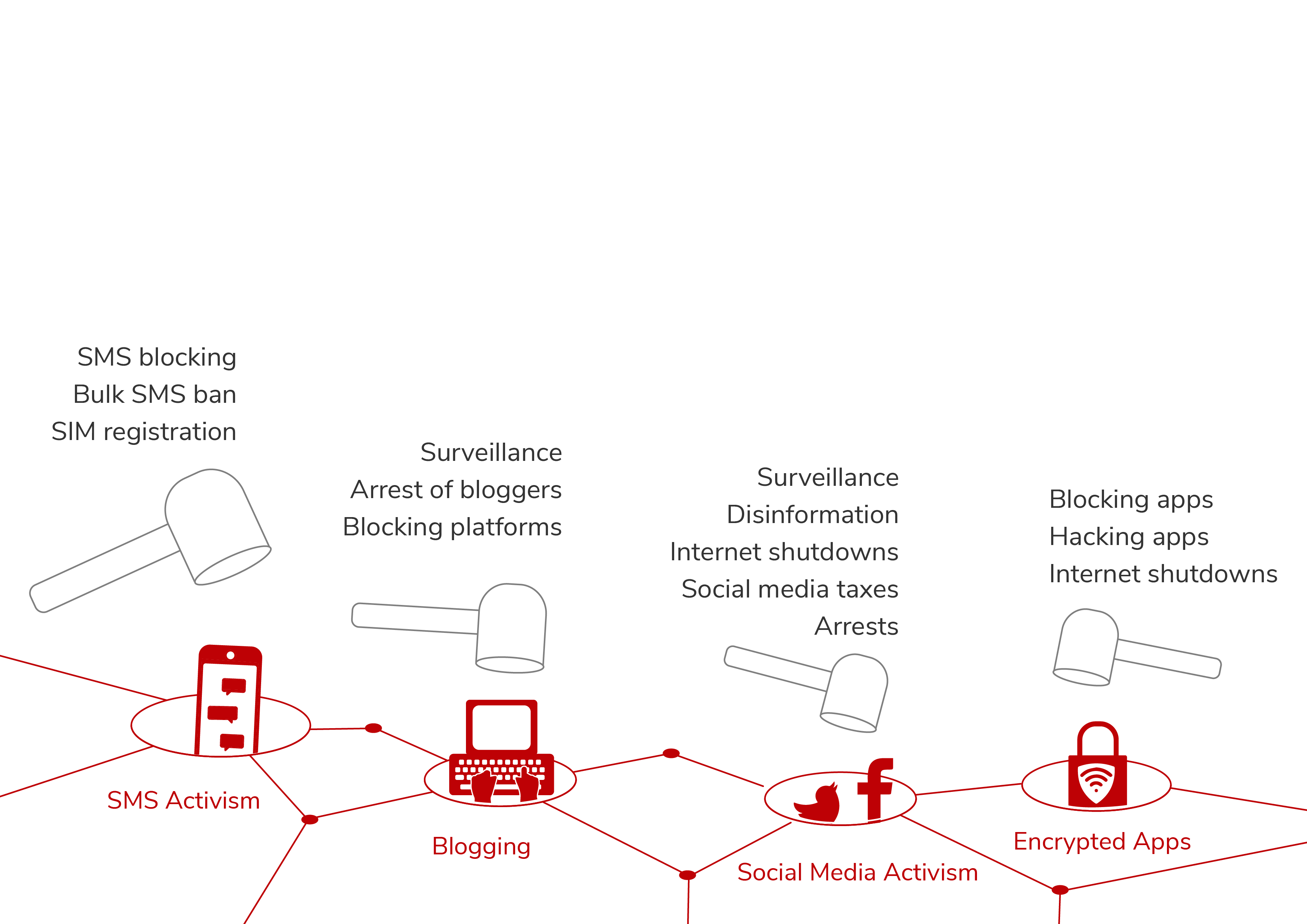